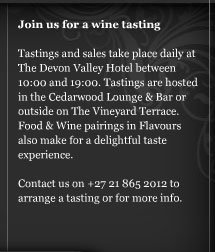 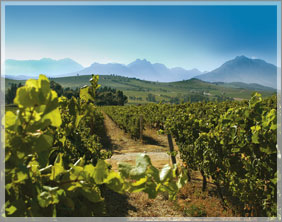 Devon Valley is one of Stellenbosch's best-kept secrets, both scenically and viticulturally. Vines have flourished here since the 18th century and it has an enviable reputation, not only for the red wines produced here, but also as a source of premium grapes. Bertrams winery carried the flag for many years. More recently the valley has rapidly gained recognition as one of the world's premium red wine sites due to the efforts of Middelvlei, Louisvale, Clos Malverne, Devon Hill and Hidden Valley. Distell's sparkling wine house, J.C. le Roux, has also settled here.

The new Ward, demarcated in 1997, within the Stellenbosch Wine of Origin runs north/south and lies to the west and alongside the village of Stellenbosch. A tiny river, the Veldwachtersrivier, or Shepherds Creek, runs through it and joins up with the Eerste Rivier (First River). The valley is open to the south and demarcated by low hills on the other sides. The total area is 2000ha, with 750ha under vine. Most of the vineyards are red.

The slopes of the valley are generally blessed with very good, deep soils formed by decomposed sandstone. Their colour is either yellow or red-brown and they have a fairly high clay fraction, though it is well dispersed. At the bottom of the valley the soils are generally poorer and mainly alluvial, often grey-white in colour, under which lies a fairly hard clay layer which limits these soils.

The eight wine producers in the valley have formed the Devon Valley Vintners' Association. Its charter commits members to practices that benefit the community, the environment and the quality of the valley's produce. All wineries that use grapes from the valley are entitled to label these as "Wine of Origin Devon Valley".

ABOUT US | NEWS | SURROUNDING AREA | OUR WINES | DISTRIBUTORS | CONTACT US